US 'not to stomach defeat in Gaza' 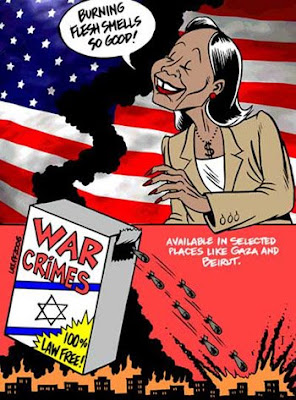 "Washington is reportedly "worried" that Hamas may gain in popularity if US-backed Israeli attacks on Gaza amount to a war of attrition.

A new report has revealed that the 5-day-old Israeli military campaign against Gaza has made the Bush administration increasingly nervous as the number of Palestinian casualties continues to rise. Washington is extremely concerned that if the massive offensive against one of the most populated areas on earth does not lead to the fall of Hamas, support for the Palestinian group may increase, the Los Angeles Times reported on Wednesday.

The daily cited sources close to discussions between Washington and Tel Aviv as saying that the White House wants Israel to settle on a timetable and an exit strategy so that their bitter experience in the 2006 war on Hezbollah is not repeated.......

"You're not hearing that same confidence you did in 2006 that the Israeli military can impose a new strategic reality and should go full force," the daily quoted an unnamed Arab diplomat close to the discussions as saying.