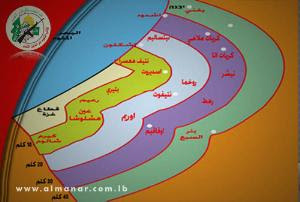 "01/01/2009 After six days of the Israeli aggression against the Gaza Strip, Israeli media reflected the confusion that the Israeli occupation army is passing through following the brave steadfastness of the Gazans, despite the high death toll among them that reached 400 martyrs till now, along with the missile system of the Palestinian resistance that has never stopped firing into the Israeli settlements.

Israeli daily Haaretz published Thursday an analysis in which it reflected that Israeli chaos, linking between the current aggression against Gaza and the Israeli defeat during the Second Lebanon War in July 2006.......

“The declared goal of Operation Cast Lead ("the creation of a new security reality") is minimalist and reveals Israel's unwillingness to fight for a long-term resolution that will create a comprehensive new reality, not only a new security reality. What is worse, the way the battle is being waged after the impressive air strikes raises concerns that the operation's leaders do not intend to achieve even its modest aims, among other reasons because Israel once again blinked first.”

Haaretz report continued, “The blinking did not begin on Tuesday with Barak's announcement that Israel was considering a "humanitarian" 48-hour cease-fire. It began when the first air strikes were not immediately accompanied by a ground operation. Israel showed, as in Lebanon, that it does not want to reach a strategic resolution and does not have the will, determination or self-confidence to lead a military operation beyond reprisal and punitive action.”

“The more days go by with the main component aerial bombardment, which, like in Lebanon, cannot stop the rockets, the public begins to feel (our leaders' arguments show this) that the operation is losing momentum. A sense is growing that something has been missed, especially in the Negev communities. The national mood, which rallied last Saturday, is beginning to sag, and disappointment is beginning to seep in.”......

The report concluded, “If there will still be a ground operation in Gaza, it must not be hesitant like in Lebanon…And if the political and military leadership does not have the courage to risk soldiers to decide the campaign and attain its goals, then it is better not to risk them. If the concealed goal is not resolution but another cease-fire, then it is a pity to use ground forces because the enemy will revive once again and smuggle in rockets, which this time will be able to hit Dimona, and perhaps even Tel Aviv. And once again the air force will be sent in. And again, after every red line is crossed, there will be an amazing air strike. And what then? And until when?”

US EXPERT: HAMAS ADOPTING HEZBOLLAH TACTICS IN GAZA
Another study said that US counterterrorism experts said that since taking control of the Gaza Strip in 2007, Hamas has adopted the rocket tactics used by Hezbollah, shifting away from its reliance on martyrdom operations in the Zionist entity.

Part of that shift may be attributable to Hamas' arsenal of longer-range rockets. Several Israeli settlements that had previously been out of reach of Hamas' rockets now are being hit by them, said a U.S. counterterrorism official who spoke on condition of anonymity to discuss foreign intelligence. Hamas rockets have struck the large southern cities of Be'er Sheva and Ashdod, home of Israel's largest port, for the first time since the end of the truce on December 19.

A former U.S. intelligence official said Hamas is now using Iranian versions of the Katyusha and Grad rockets with a range of 18.6 to 21.7 miles (30 to 35 kilometers). The new rockets dramatically extend Hamas' reach. Hamas had relied heavily on the shorter-range homemade Qassams that fly only up to 1.8 miles (3 kilometers), the former official said. The rockets do not have guidance systems so they are indiscriminate in targeting. But that makes them well suited for a barrage on a town or a dispersed battlefield of soldiers, particularly if fired in great numbers. "Hamas has definitely learned from Hezbollah," the former official said....... "
Posted by Tony at 8:16 AM