"Creative anarchy" in the Gaza Strip 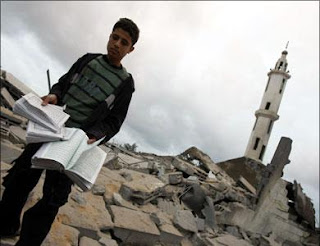 ".....Last night, the last of 2008, was the most horrible and horrendous for all Gazans. Almost every moment, a bomb fell on civilian homes, or other targets that had already been bombed to rubble. At least 10 people were killed and many other injured. Among the targets bombed by the Israeli Offense Forces were the Ministry of Justice, the Ministry of Education and the Legislative Council.

Bombing these institutions has nothing to do with isolating Hamas or weakening the resistance. The Israeli intent seems to be to create what US Secretary of State Condoleezza Rice called "creative anarchy." Indeed Israel has always wanted to keep Palestinians living a life of disorder. They want chaos to prevail in the Gaza Strip. They want to eliminate any legislative or judicial system and replace it with the law of the jungle that existed before Hamas took power.

Such a state of anarchy would be further perpetuated by keeping Palestinians in Gaza ignorant and illiterate. It is to advance this sinister policy that Israel is systematically destroying the education system, targeting universities, schools, and above all the Ministry of Education. As a colonial power, Israel has adopted this old colonial strategy to dominate the Palestinians. It is precisely the same strategy used by slaveholders and colonizers: keep the people you want to control in ignorance so they cannot rebel.

Israel's claims that Palestinians have been using their institutions as military sites or for hiding and manufacturing weapons are preposterous and ridiculous. These allegations are just like the fake claims about Iraqi weapons former US Secretary of State Colin Powell used to justify the invasion of Iraq......"
Posted by Tony at 4:38 AM