The Politics of an Israeli Extermination Campaign 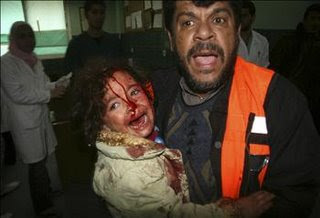 "Because of the unconditional support of the entire political class in the US, from the White House to Congress, including both Parties, incoming and outgoing elected officials and all the principle print and electronic mass media, the Israeli Government feels no compunction in publicly proclaiming a detailed and graphic account of its policy of mass extermination of the population of Gaza.

Israel’s sustained and comprehensive bombing campaign of every aspect of governance, civic institutions and society is directed toward destroying civilized life in Gaza. Israel’s totalitarian vision is driven by the practice of a permanent purge of Arab Palestine informed by Zionism, an ethno-racist ideology, promulgated by the Jewish state and justified, enforced and pursued by its organized backers in the United States.

The facts of Israeli extermination have become known: In the first six days of round the clock terror bombing of major and minor populations centers, the Jewish State has murdered and seriously maimed over 2,500 people, mostly dismembered and burned in the open ovens of missile fire. Scores of children and women have been slaughtered as well as defenseless civilians and officials.

They have sealed off all access to Gaza and declared it a military, free fire zone, while expanding their target to include the entire population of 1.5 millions semi-starved prisoners......

Israel’s crimes against humanity demand a public response: social action, which will force it to cease and desist from its campaign to exterminate the people of Gaza. Because the Jewish state has assaulted a vast array of Palestinian social institutions, which resonate with those in our own society, we can and should mobilize them to condemn and boycott their counterparts in Israel.....
Until we neutralize the pervasive power of the Zionist Power Configuration in all of its manifestations – in American public and civic life – and its deep penetration of American legislative and executive offices, we will fall short of preventing Israel from receiving the arms, funding and political backing to sustain its wars of ethnic extermination.

When told that the great majority of the world’s people are sickened and incensed by Israel’s mass murder of the citizens of Gaza, we can easily imagine the contemptuous dismissal by Israel’s top leaders, paraphrasing Joseph Stalin: How many bombers, missiles, fighter planes and powerful lobbies do they (the outraged people of the world) have?"
Posted by Tony at 11:05 AM