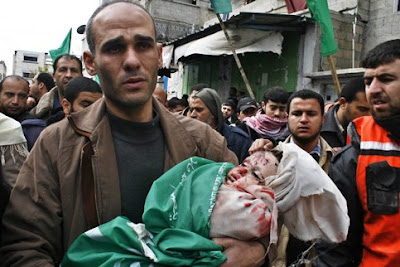 "Israeli attacks on Gaza have continued for an eighth day. The Israeli Occupation Forces (IOF) targeted more civilian objects. This includes bombardment of more houses and the Civil Defense building in Bani Suhaila town and the American School in northern Gaza. Air raids have also targeted open areas within the neighborhood, but particularly along the eastern and northern borders and the border between Gaza and Egypt. IOF's naval vessels escalated their bombardment of Gaza's beaches....."
Posted by Tony at 11:58 AM