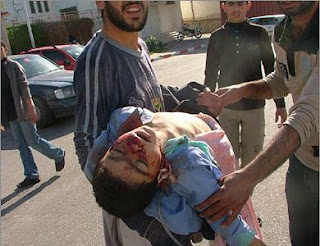 "The death toll in Gaza continues to rise. The carnage is everywhere – city streets, a mosque, hospitals, police stations, a jail, a university bus stop, a plastics factory, a television station. It seems impossible, unacceptable, to step back to analyze the situation while bodies remain buried under the rubble, while parents continue to search for their missing children, while doctors continue to labor to stitch burned and broken bodies back together without sufficient medicine or equipment. The hospitals are running short even of electricity—the Israeli blockade has denied them fuel to run the generators. It is an ironic twist on the legacy of Israel’s involvement in an earlier massacre – in the Sabra and Shatila camps, in Lebanon back in 1982, it was the Israeli soldiers who lit the flairs, lighting the night sky so their Lebanese allies could continue to kill.

But if we are serious about ending this carnage, this time, we have no choice but to try to analyze, try to figure out what caused this most recent massacre, how to stop it, and then how to continue our work to end the occupation, end Israel’s apartheid policies, and change U.S. policy to one of justice and equality for all......"
Posted by Tony at 6:28 PM