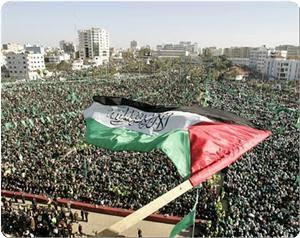 "RAMALLAH, (PIC)-- Hamas Movement in the West Bank has affirmed Thursday that the battle in Gaza was the battle of Palestine and the battle of the Arab and Muslim Ummah and the free people of the world against the occupation.

In a statement it issued, and a copy of which was obtained by the PIC, the Movement called on the Palestinian people in the West Bank to hold massive demonstrations in solidarity with "our brothers in Gaza".

"Let all the days in the West Bank be devoted to the steadfast Gaza, let it be days for the souls of the pure martyrs in Gaza, and days for solidarity with our people in the steadfast Strip", the statement added.

The Movement also urged the "mujahideen" and the rest of the Palestinian people to confront the Israeli occupation army and the Israeli settles in every Palestinian city, village, and refugee camp.

In this regard, the Movement called on the PA security forces to desist from aborting Palestinian enthusiasm and activities against the occupation, underlining that the demonstrations weren’t directed against them. "
Posted by Tony at 2:11 AM