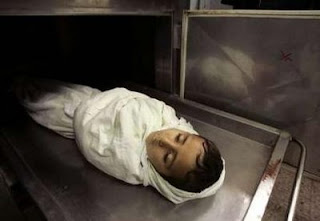 Hazem Balousha in Gaza and Toni O'Loughlin in Jerusalem
The Guardian, Friday 2 January 2009

"Salim Abu Sadaq and six of his relatives scrabbled around in the soil of Gaza City's Sheikh Radwan cemetery for two hours yesterday, searching for a space in which to lay his cousin to rest. In the end, he opened his grandfather's grave and moved the older man's remains aside to make space for the body of his grandson.

After "The Beginning", the first chapter in the Qur'an, was read aloud to mark the end of a life, Abu Sadaq expressed misgivings about the shared grave. "I feel very bad about it. It hasn't happened before, but there's no space."......."
Posted by Tony at 3:07 AM