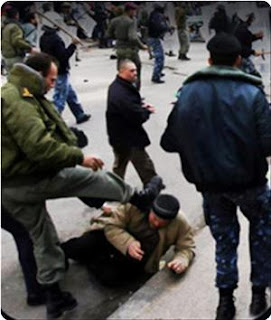 "RAMALLAH, (PIC)-- PA chief Mahmoud Abbas has ordered his security forces to prevent any attempt by Palestinian citizens in the West Bank to spark a third intifada against the Israeli occupation despite the increasing death toll in Gaza Strip, well-informed PA security sources in Ramallah confirmed.

According to the sources, that did not want to be identified, directives and orders from Abbas's office were conveyed to all PA security departments across the West Bank calling on them not to allow enraged Palestinian citizens confront Israeli occupation soldiers positioned at the outskirts of the Palestinian cities.

In press conference he held last Tuesday, Reyadh Al-Maliki, the foreign minister in the unconstitutional PA government in Ramallah city, explained that the PA security forces would allow Palestinians in the West Bank to hold "peaceful" rallies to "express their sympathy with Gaza", but it will stop them if they confront the Israeli occupation soldiers.

The sources also added that Abbas fears possible eruption of a third Palestinian intifada in the West Bank that could lead to the collapse of Abbas's authority and finish his political ambitions in occupied Palestine in the event of confrontation.

In this regard, the sources added, Abbas ordered the PA security forces to chase and arrest Hamas and Islamic Jihad activists in the West Bank to prevent them from carrying out retaliatory attacks on Israeli targets in the West Bank or in the 1948-occupied Palestinian lands.
The directives were immediately carried out as more than 80 Hamas cadres were arrested at the hands of Abbas's forces since the Israeli aggression on Gaza started Saturday.

Moreover, the sources revealed that Abbas and the PA leadership in the West Bank were worried that Hamas could restore its popular and military strength in the West Bank that was weakened in the aftermath of the frenzied PA arrest campaigns against its cadres and political leaders over the pat 18 months.

Hundreds of Hamas's cadres and political leaders in the West Bank were arrested, and tens of local charities affiliated with it were sealed off at the hands of Abbas's security forces since the unconstitutional government of Salam Fayyadh was installed by Abbas.

Tension had run high in the West Bank with the start of the massive IOF troops' aggression against the densely populated Gaza Strip bordering the biggest Arab country, Egypt."
Posted by Tony at 2:01 AM