Shortages put hospitals on the brink of collapse 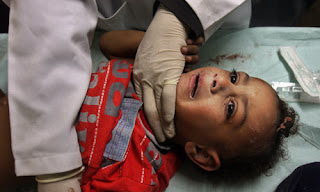 "Emergency medical supplies were being flown to the Middle East yesterday to help Gaza's overstretched hospitals, where doctors say they are still struggling to cope with hundreds of injured patients.

Doctors at the Shifa hospital, a 585-bed complex which is the largest in Gaza, said they had treated patients on the floor and conducted operations with as many as three different patients and a dozen doctors crowded into each operating theatre.

All 25 intensive care beds were full, said Dr Hussain Ashaur, the hospital director, and there were still another 87 patients in a critical condition waiting to enter intensive care.

He said there were severe shortages of medical supplies, including gauze, sterilisation fluids and anaesthetics. In total 135 types of medical supplies were needed and 94 separate medicines. Sheets and cloth for intensive care beds were in such short supply that they were being washed three times a day.....