Barak: We Struck Hamas but It’s Still Striking Back! 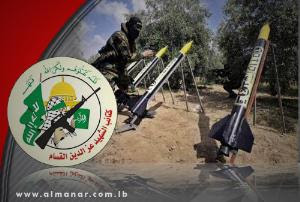 "01/01/2009 Two Grad rockets fired by Palestinian resistance fighters in the Gaza Strip on Thursday scored a direct hit on an eight-floor building in the northern Negev city of Ashdod.
The rockets caused a fire to erupt in the building. There were no physical injuries reported.
The strike on Ashdod was the twelvth rocket to hit the western Negev on Thursday. Eight Qassam rockets exploded in the Eshkol region over the course of the morning, and two Grad rockets hit the city of Beersheba.

Hamas's armed wing said Thursday it had fired two rockets at an Israeli military base. The Ezzedine Al-Qassam Brigades said in a statement they had fired a developed Grad-type rocket at the Hatzerim air force base west of Beersheba, some 40 kilometers from the Gaza border. Later, it announced firing another rocket on the base.

The Israeli military confirmed Thursday that the Palestinian resistance in the Gaza Strip had fired another seven rockets into the occupied territories. Also, Al-Qassam Brigades fired two Qassam rockets on Raaem military base, on the Eastern side of Gaza Strip. Three Grad-type rockets were also fired at Beersheba overnight Wednesday, causing no casualties.

According to Israel Radio, the city's alarm system was not functioning and the Home Front Command would fix it by Thursday afternoon. Due to the malfunctions in Beersheba's air raid siren system, residents of the Negev city are asked to monitor broadcasts on Radio South (97 FM) and Army Radio (102.3 FM), where sirens will be heard in case of a rocket attack.

Also overnight Wednesday, two Qassam rockets were fired at Netivot. No casualties or damage were reported. More than two dozens rockets and mortar shells had been fired by mid-day. One rocket landed in a small farming community about 20 miles (32 kilometers) southeast of Tel Aviv.

School was cancelled in large swaths of Israel's south because of the rocket threats. The 18,000 students at Ben-Gurion University in Beersheba, southern occupied territories' only university, were also told to stay home.

Barak's order will elapse in 48 hours, unless sanctioned by the cabinet, and in the meantime, the defense minister urges the city's residents to comply with the Home Front Command's emergency instructions. "We have struck Hamas, but as we all see, it's still striking back," he said during a tour of Beersheba. "
Posted by Tony at 8:07 AM