It is now impossible to trust any 'official' inquiry into Iraq 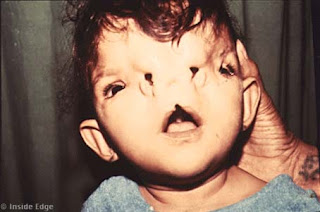 The Government seems to have institutionalised duplicity

By Yasmin Alibhai-Brown
The Independent

"I watched a report on Fallujah last week on Sky News by Lisa Holland for which she deserves our gratitude and a top television award. It featured a quietly spoken Iraqi neo-natal specialist, Dr Muntaha Hashim, who is finding that in that town, bombed and collectively punished by the allies, there has been a massive increase in the number of deformed babies. Dr Hashim sees children with two heads – one, a young girl with bountiful hair was curled up on a bed – and others limbless, or born without vital organs. The number has doubled since the days of Saddam.

Some unidentified chemical weaponry is responsible. Pro-war politicians, dodgy spooks, spin doctors and unrepentant media warriors such as Christopher Hitchens still claim triumphantly the war was a victory of good over evil. Their own offspring will not be born with two heads and, they must believe, Iraqis are paying but a small price for 'freedom'......"
Posted by Tony at 3:47 AM