What a Farcical Abrupt Ending to the Summit of the Arab Eunuchs! How Do You Top This??? 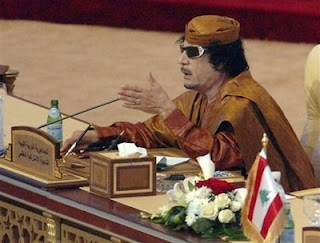 Libya's Gadhafi storms out of Arab summit in Qatar

"DOHA, Qatar – Libyan leader Moammar Gadhafi stormed out of an Arab summit on Monday after denouncing the Saudi king and declaring himself "the dean of Arab rulers."

Gadhafi disrupted the opening Arab League summit in Qatar by taking a microphone and criticizing Saudi's King Abdullah, calling him a "British product and American ally."

When the Qatari emir tried to quiet him, the Libyan leader and current Africa Union chairman insisted he be allowed to speak.

"I am an international leader, the dean of the Arab rulers, the king of kings of Africa and the imam (leader) of Muslims, and my international status does not allow me to descend to a lower level," Gadhafi said......

"Now after six years, it has proved that you were the liar," Gadhafi told Abdullah, adding that he now considered their "problem" over and was ready to reconcile......"
Posted by Tony at 2:25 PM