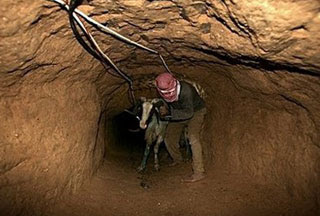 "Egypt has again tightened the noose around Gaza with its destruction of six tunnels -- considered the food artery into the besieged ghetto.

The six tunnels along the Egyptian border with the Gaza Strip contained piping, toys, spare auto parts as well as clothes and other products destined for the Palestinian territory, Egypt's official MENA news agency revealed.

The attacks on the tunnels is the latest move by Cairo -- an accomplice in the imposition of a 20-month Israeli-imposed blockade on Gaza -- to stop the delivery of food and supplies into the territory.

In mid March, Egypt seized a flock of 560 sheep from entering the Palestinian ghetto and auctioned them off to the highest bidder.

Israel imposed a blockade on Gaza in 2007 after the democratically-elected Palestinian government Hamas took control of the territory. The blockade has been in place ever since. The siege prevents necessary humanitarian aid and assistance from reaching the 1.5 million people inside the strip -- only about twice the size of Washington DC.

To add to the humanitarian catastrophe in the territory, Israel unleashed a three-week war on the sliver on December 27. Three weeks of ensuing airstrikes and a ground incursion inflicted more than $1.6 billion in damages on the Gazan economy. The carnage also killed around 1,350 Palestinians and injured nearly 5,450 people -- mostly civilians........

In line with its efforts in support of Israel, the Egyptian government has installed surveillance cameras along its border with Gaza -- an initiative that has won strong praise in Tel Aviv. The cameras help Cairo in pinpointing tunnel entries, allowing them to be targeted by Egyptian forces and Israeli aircraft. "
Posted by Tony at 6:18 AM

Crystal Coleman said...
This comment has been removed by the author.
7:51 AM

Your post is just an outstanding...!! thanks for such a superb post, it is really going awesome. Regards cash for cars brisbane :)

I have read several just right stuff here..! bookmarking for revisiting. I wonder how much attempt you set to make such a fantastic informative website. Regards cash for scrap cars hobart ;)

I haven't checked in here for some time as I thought it was getting boring, but the last several posts are good quality so I guess I will add you back to my everyday blog list. You deserve it, 🙂 ;) Regards cash for cars brisbane

Thank you very much for the information provided! I was looking for this data for a long time, but I was not able to find the trusted source.. Regards cash for scrap cars gold coast

I believe you have remarked some very interesting points, appreciate it for the post. Regards cash for cars logan

Thanks for sharing this amazing information...!! If you want to sell your unwanted, used car. So Please visit cash for cars logan website :)