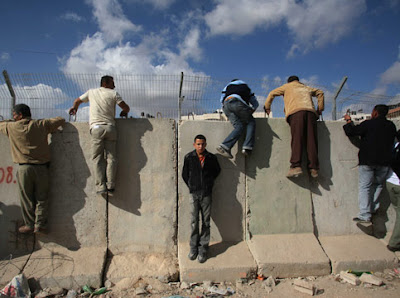 "Israel's decision to force all prospective Israeli citizens to declare loyalty to "a Jewish and democratic state" is not only racist, but designed to further institutionalise the dispossession of Palestinians.

It is ironic that the oath should include the term democracy as the law itself is a blatant exercise in state coercion.

As Adalah, a legal centre for Arab minority rights in Israel, puts it, the new amendment "requires all non-Jews to identify with Zionism and imposes a political ideology and loyalty to the principles or Judaism and Zionism".....

All evictions of Palestinians - whether through the demolition of homes, deportations or the confiscation of lands - are committed under the guise of Israel's security needs. But their aim is, in fact, to maintain a Jewish majority and to reduce - and if this continues, potentially end - the presence of Palestinians in both Israel proper and the Occupied Territories.The cabinet has turned the loyalty oath not only into a tool for the subversion of Palestinians, but also into a vehicle for the continued eviction of Palestinians from their homeland.

Editors of the Israeli daily Haaretz, who urged the government not to pass the law, have unequivocally rejected the security rationale. "The wording of the initiative perpetuates the lie that these measures are required by security considerations, when in truth they are clearly driven by demographic concerns," said an editorial published prior the decision's ratification.....

The amended law is another brick in the apartheid system that Israel has built. But the main problem in Israel is not apartheid but the systemic colonisation and dispossession of Arabs. And apartheid in the case of Israel is a tool - not an aim in itself - to complete the expulsion of Palestinians from their homeland."
Posted by Tony at 5:17 AM