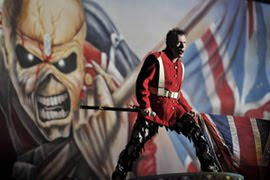 Could Iron Maiden's philosophy inspire an alternative economic system in the Middle East?

"....A musical path towards modernisation

And it is here that the group's unique philosophy offers interesting lessons for its large fanbase across the Arab and Muslim worlds - a young generation that is struggling to define a new role for themselves and the region in a globalised system that, much like the music business, seems rigged against them.

First and foremost, do not play their game. Neoliberalism, the dominant system of globalisation, will never produce greater prosperity, democracy or sustainable development for the vast majority of the peoples of the region, precisely because this model of economic integration inevitably concentrates wealth, and through it power, in fewer hands.

Of course, this process suits autocratic elites and the relatively small but politically crucial class of citizens who benefit from such policies just fine. But for average Egyptians, Moroccans or Syrians, this paradigm has brought few if any benefits.

Secondly, think historically, stay true to your roots, and "do it yourself". One of the main reasons why heavy metal, and Maiden in particular, are so popular across the Middle East and Muslim world is precisely because the genre, and the band, represents a "DIY," or do it yourself, philosophy that has allowed artists and fans to avoid the compromises that have plagued other genres like hiphop and mainstream rock.

For centuries the peoples of the Arab and Muslim world have been told that they had to follow someone else's model. They have had to contend with policies imposed from above and outside - first through colonialism and then again, beginning in the 1970s, through the "structural adjustment programmes" that have been at the heart of IMF, World Bank and other Washington consensus policies towards the region.

Today, a new generation is emerging across the region that refuses to accept this imbalance of power. But, the problem is how to create a viable alternative. One alternative, of course, is al-Qaeda and other extremist movements and ideologies. But as many Middle Eastern metalheads have pointed out while lamenting the fact that so many of their fellow citizens consider them little better than Satan worshipers, being an extreme metal fanatic is a lot better than the alternative.

And it is here too that the Maiden model is relevant. Songs like Brave New World, No More Lies, Fear of the Dark, and their biggest hits like Trooper and Run to the Hills all resonate with the band's myriad fans across the region because the lyrics reflect the complexity of their histories, their lives, and their futures. These themes are even more pregnant with meaning in Beirut or Tehran, which have suffered such violence in the recent past, than they are in "the Mecca of music," Madison Square Garden.

"That's certainly one reason Maiden is special," explained lead singer Bruce Dickinson when I asked him about why the group is so popular in the Middle East. "But also, it's the family aspect. The band and the fans, we're like one big family," he continued, echoing the words of amazement an Egyptian friend of mine uttered when we first saw the scene in Dubai. "Finally, a real community," he said with an almost palpable feeling of joy.

As many metal fans from the region have pointed out to me, Maiden's songs remind them that they should not trust the hype and slogans promising a better tomorrow, that progress demands putting aside easy prejudices in favour of a much harder but more honest discussion about the future and that they should remember the past but not be afraid of the future.

If you do that, then you are in a position to create your own networks using your own tools, people, and principles: "Do it yourself" on an international scale. Instead of trying to jump on someone else's globalisation express, develop your own vision that is true to you. "Never sell out, never compromise, and always stay true," is how Smallwood explains it.

This is, of course, easier said than done in the Middle East, since the region's rulers in general have so much invested in the existing system. But Maiden succeeded precisely because the band worked around the system rather than trying to join it.

Of course, building a successful career as a rock band, however difficult, is nothing compared to building an alternative economic and cultural system in a region plagued by war, occupation, authoritarianism and poverty. But the point of music and the artists who produce the culture the rest of us consume is rarely to provide a direct blueprint for action.

Instead, it is to inspire, to give a vision of a different future and the courage to get up in the morning and figure out how to survive and even thrive in a system that is very much not set up for your benefit....."
Posted by Tony at 4:40 AM