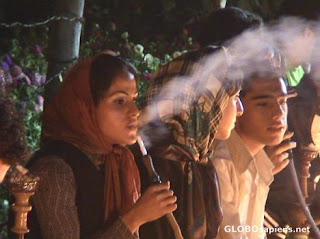 "Hamas has banned women from smoking water pipes in cafes, saying it destroys marriages and sullies the image of the Palestinian people. "It is inappropriate for a woman to sit cross-legged and smoke in public," said Ihab Ghussein, the interior ministry spokesman yesterday. Plainclothes security officials marched through popular seashore cafes over the weekend, ordering owners not to serve water pipes to female customers. Confused owners initially thought the ban applied to both men and women, killing most of their evening business. The Hamas government swiftly issued a statement reassuring residents the ban only applied to women.[Ah.....The Talibanization of Gaza is proceeding on schedule!]

Smoking water pipes is a popular habit among both sexes in the impoverished Gaza Strip....."
Posted by Tony at 4:12 AM