Haneen Zoabi: The largest threat to democracy is Zionism 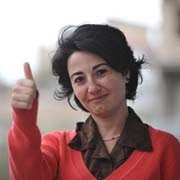 "On 13 July, the Israeli Knesset voted by a large margin to strip the parliamentary privileges of Haneen Zoabi, a member of the Palestinian Israeli party Balad. The measure was a punishment for Zoabi's participation in the Gaza Freedom Flotilla. As described in the Israeli daily Haaretz, during the raging debate, Member of Knesset (MK) Anasatassia Michaeli rushed toward Zoabi and handed her a mock Iranian passport with Zoabi's photo on it. "Ms. Zoabi, I take your loyalty to Iran seriously and I suggest you contact Ahmadinejad and ask him to give you an Iranian diplomatic passport that will assist you with all your diplomatic incitement tours, because your Israeli passport will be revoked this evening," said Michaeli, who is a member of Foreign Minister Avigdor Lieberman's explicitly anti-Arab Yisrael Beiteinu party ("Knesset revokes Arab MK Zuabi's privileges over Gaza flotilla," 13 July 2010).
The debate over revoking Zoabi's parliamentary privileges was nearly as rancorous as her appearance at the Knesset speaker's podium in the immediate wake of the Flotilla massacre. While Zoabi attempted to relate her experience on the Mavi Marmara, where she coaxed Israeli commandoes to stop shooting and beating passengers, Knesset members from a broad array of parties leapt from their chairs to shout her down. "Go to Gaza, traitor!" shouted MK Miri Regev of Likud. "One week in Gaza as a 38-year-old single woman and we'll see how they treat you!" barked Yohanan Plesner of the supposedly centrist Kadima party. Finally, Moshe Mutz Matalon of Yisrael Beiteinu lamented that the Israeli commandoes "left only nine floating voters" ("MK Regev tells Zoabi: Go to Gaza, traitor!," YNet, 2 June 2010).
I met Zoabi at her office in the bustling center of Lower Nazareth on 12 June. While preparing a spread of biscuits and chocolates for me, she told me that a reporter from Nablus who met her earlier in the day had been detained at a checkpoint and had her laptop seized. Zoabi was convinced that the Shin Bet (Israel's General Security Service) was monitoring her communications and movements as it does with many Balad Party leaders. Despite the tense climate and violent threats against her, she spoke without restraint about her experience on the Mavi Marmara, the predicament of Palestinian members of the Knesset, and what she considered the fascist direction of Israeli society......"
Posted by Tony at 6:22 AM