The New Warlord of Oz 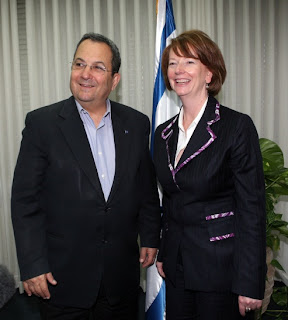 ".....The new prime minister’s partner is a former hair products salesman called Tim Mathieson. This would be of no interest had he not been given the job of “Australia’s men’s health ambassador” by one of Gillard’s cabinet colleagues, the health minister, even though he had no experience in healthcare. Mathieson is now a “rising star” in real estate, thanks to one Albert Dadon, whose company is seeking planning permission for a contentious high rise development in Melbourne. Dadon can claim membership of the Order of Mates. As head of the Australia Israel Cultural Exchange, he arranges admiring tours of Israel for politicians and journalists. Gillard went on such a junket last year in the wake of Israel’s massacre of 1400 people in Gaza, mostly women and children. She who would be the first female prime minister of Australia drooled her uncritical support for their killers. "
Posted by Tony at 6:24 AM