Tourists Now in Their Land of Birth 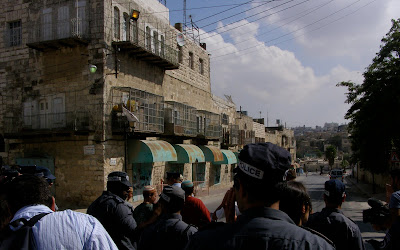 "....But when is a gesture a genuine confidence-building measure? And when does Israeli talk of "gestures" in fact mask blatant Israeli insensitivity, total lack of responsibility of occupier vis-à-vis occupied?

In Israel's lexicon of the Occupation, its cloak of "gestures" is generally presented from under an all-encompassing umbrella -- "Israel's security needs". These often have more to do with serving Israel's own interests as the power in place, or of the interests of its settlers. Gestures have little to do with easing the plight of the Palestinians. And, usually have zero effect on easing the occupation.

In the occupied town of Hebron, the Israeli army recently sealed up the windows of several Palestinian homes. The openly declared purpose was to protect the settlers against would-be Palestinian sharpshooters. The precautionary measure was taken to enable the settlers to take a shorter route by foot to the Cave of the Patriarchs or the Al-Khalili Mosque, a site holy to both Jews and Muslims.

In a mirror image to the "convenience" of the settlers, the army is also making it more difficult for the Palestinians to gain access to their homes.

"The army stands to attention to serve the settlers, and the government stands behind the military," says historian Zeev Sternhell, a prominent voice opposing the Occupation.

Were the Netanyahu government to instruct the military governor in Hebron to remove the bricked-up windows that the army itself had just put in place, would the prime minister call that a 'gesture'?

Or, take the case of Dr. Imad Hamada, 43, a Palestinian expert in nanotechnology, born in occupied East Jerusalem. His family traces its origins in the city several generations back.

Between 1989 and 2007, Dr. Hamada studied electrical engineering in the U.S. and then worked in Silicon Valley to pay for his studies and to gain experience. While there, he and his family were granted U.S. citizenship. They frequently came back on family visits to Jerusalem.

Recently, Hamada was offered employment in Israel, both by an Israeli company and by a U.S. company with a branch in Israel. Both companies have since changed their minds. The reason: Israel's Interior Ministry informed Dr. Hamada that he was no longer eligible to live in Jerusalem. Officially, he is now designated "a tourist" in the place of his birth......"
Posted by Tony at 4:40 AM