Why Jordan is occupied by Palestinians 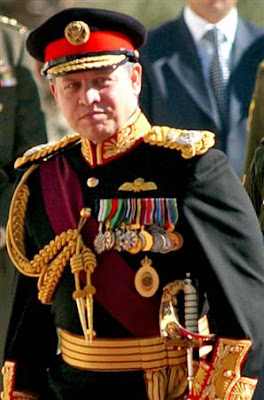 "....They moan that 86,000 Palestinians have received Jordanian passports unconstitutionally since 2005, that too many Palestinians are now in the Jordanian government, that corruption and a rigid adherence to American-Israeli policies are laying the groundwork for Israel to expel the West Bank Palestinians across the Jordan River. They have no time for the Jordanian-Israeli peace agreement.

Former General Ali Habashneh, Colonel Beni Sahar and Major General Mohamed Jamal Majalli interrupt their beef and chicken and "humous lahme" with expressions of fear and anger about the future of Jordan. Habashneh runs the Jordanian army's pensions committee and has 140,000 ex-army personnel and their families on his books; his voice is not to be taken lightly by King Abdullah of Jordan and his government. These are the king's men. But they are fierce nationalists.....

In most Arab countries, nationalism gave way to Islamist politics as old Arab secular movements failed in the face of Israeli and American pressure. But Jordan has reversed this transfer of influence. King Abdullah, to the satisfaction of most Jordanians of tribal or Palestinian origin, subdued the Muslim Brotherhood, stifled their parliamentary power and so preserved his own power. But the old-school army men and their followers, who include academics, schoolteachers and trade unionists, are now pushing the frontiers of politics in Jordan.

Around the restaurant table, there is frightening talk of ending the Arab peace treaty between Jordan and Israel; of creating a "Popular Army" of former servicemen who could create a territorial force to support regular soldiers in the event of an Israeli attack; of setting up a "new national army rather than a neo-colonial one".

General Habashneh is as explicit as any of the men. "There is corruption, a widening of the gap between rich and poor," he says. "Economic investment policies are destroying the country. This is what our national movement is all about. We are trying to get all our forces together to hold a national conference by the beginning of the new year, to decide on a strategic movement which will protect this country and remove the influence of the Israelis and Americans.".....

The open letter says that "the root cause of governmental weakness lies in the policies of privatisation and the liquidation of the public sector... that have led to the growing power of business interests and those who deal in corruption and shady financial deals... A narrow and unrepresentative coterie of political clans has monopolised the formation of cabinets and decision-making while preventing the Jordanian people from determining their fate and defending Jordan's national interests."....."
Posted by Tony at 4:29 AM