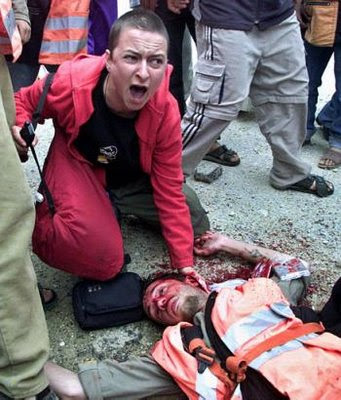 "The family of British activist Tom Hurndall have said they are angry that the Israeli soldier who killed him is to be released early from prison.

Taysir Hayb will be freed next month after serving six years of his eight-year sentence, after a ruling yesterday by the Kastina military court in southern Israel.

Hurndall was shot in the head in April 2003 as he was helping Palestinian children to cross a street in the Rafah area of Gaza.

"We have barely had time to process the news. We all feel angry and shocked," Hurndall's sister Sophie told Israel's Haaretz newspaper.

Hayb was convicted of Hurndall's manslaughter in 2005 after claiming he was shooting at an armed Palestinian. He later admitted that was a lie.

The 21-year-old activist, who had been filming with the pro-Palestinian International Solidarity Movement, died in London after nine months in a coma....."
Posted by Tony at 4:18 AM