Unlike Iraq, dressing retreat up as success will be difficult 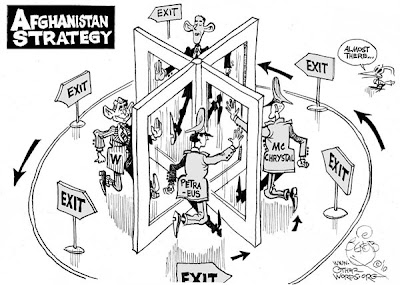 "....The US leadership is clearly divided on the merits of staying in Afghanistan, but cannot work out how to withdraw without too great a loss of face. It reached the same conclusion over Iraq, but there the situation was easier. The anti-US insurgents came from the Sunni community – which made up only 20 per cent of Iraqis – who were under intense pressure from the Shia government, the armed forces, militias and death squads. The insurgency in Afghanistan is drawn from the Pashtun community, 42 per cent of the population, and so far shows no sign of splitting [Chalk one up for the Afghans, contrasted with the Iraqis!].

With Iraq, it was enough that US voters got the impression they had won. A retreat could be conducted with no US objectives achieved, but nobody could be accused of cutting and running. This was the achievement of General Petraeus, now the military commander in Afghanistan.

But political and military conditions are wholly different there. Dressing up a withdrawal as some sort of success will be far more difficult in Afghanistan."
Posted by Tony at 7:37 AM