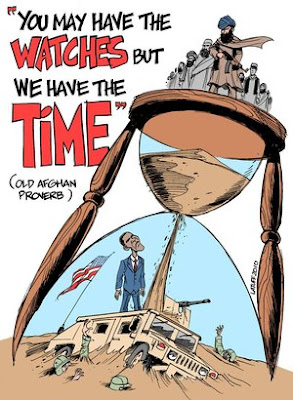 "The White House is revising its Afghanistan strategy to embrace the idea of negotiating with senior members of the Taliban through third parties – a policy to which it had previously been lukewarm.

Negotiating with the Taliban has long been advocated by Hamid Karzai, the Afghan president, and the British and Pakistani governments, but resisted by Washington.

The Guardian has learned that while the American government is still officially resistant to the idea of talks with Taliban leaders, behind the scenes a shift is under way and Washington is encouraging Karzai to take a lead in such negotiations.

"There is a change of mindset in DC," a senior official in Washington said. "There is no military solution. That means you have to find something else. There was something missing."

That missing element was talks with the Taliban leadership, the official added......"
Posted by Tony at 4:10 AM