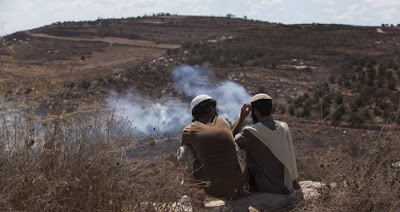 "..... One might expect that any support for a single state among Israeli Jews would come from the far left, and in fact this is where the most prominent Israeli Jewish champions of the idea are found, although in small numbers.

Recently, proposals to grant Israeli citizenship to Palestinians in the West Bank, including the right to vote for the knesset, have emerged from a surprising direction: Right-wing stalwarts such as knesset speaker Reuven Rivlin, and former defence minister Moshe Arens, both from the Likud party of Binyamin Netanyahu, the prime minister.

Even more surprisingly, the idea has been pushed by prominent activists among Israel's West Bank settler movement, who were the subject of a must-read profile by Noam Sheizaf in Haaretz......

Their visions still fall far short of what any Palestinian advocate of a single state would consider to be just: The Israeli proposals insist on maintaining the state's character - at least symbolically - as a "Jewish state," exclude the Gaza Strip, and do not address the rights of Palestinian refugees.

And, settlers on land often violently expropriated from Palestinians would hardly seem like obvious advocates for Palestinian human and political rights.

Although the details vary, and in some cases are anathema to Palestinians, what is more revealing is that this debate is occurring openly and in the least likely circles.

The Likudnik and settler advocates of a one-state solution with citizenship for Palestinians realise that Israel has lost the argument that Jewish sovereignty can be maintained forever at any price. A status quo where millions of Palestinians live without rights, subject to control by escalating Israeli violence is untenable even for them.

At the same time repartition of historic Palestine - what they call Eretz Yisrael - into two states is unacceptable, and has proven unattainable - not least because of the settler movement itself......

That proposals for a single state are coming from the Israeli right should not be so surprising in light of experiences in comparable situations.

In South Africa, it was not the traditional white liberal critics of apartheid who oversaw the system's dismantling, but the National Party which had built apartheid in the first place. In Northern Ireland, it was not "moderate" unionists and nationalists like David Trimble and John Hume who finally made power-sharing under the 1998 Belfast Agreement function, but the long-time rejectionists of Ian Paisley's Democratic Unionist Party, and the nationalist Sinn Fein, whose leaders had close ties to the IRA.

The experiences in South Africa and Northern Ireland show that transforming the relationship between settler and native, master and slave, or "horse and rider," to one between equal citizens is a very difficult, uncertain and lengthy process.

There are many setbacks and detours along the way and success is not guaranteed. It requires much more than a new constitution; economic redistribution, restitution and restorative justice are essential and meet significant resistance.

But such a transformation is not, as many of the critics of a one-state solution in Palestine/Israel insist, "impossible." Indeed, hope now resides in the space between what is "very difficult" and what is considered "impossible".

The proposals from the Israeli right-wing, however inadequate and indeed offensive they seem in many respects, add a little bit to that hope. They suggest that even those whom Palestinians understandably consider their most implacable foes can stare into the abyss and decide there has to be a radically different way forward.

We should watch how this debate develops and engage and encourage it carefully. In the end it is not what the solution is called that matters, but whether it fulfills the fundamental and inalienable rights of all Palestinians."
Posted by Tony at 3:30 AM