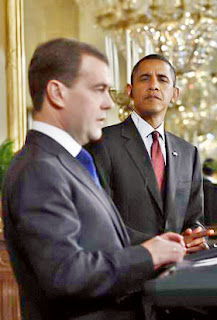 "Mahmoud Ahmadinejad, the Iranian president, has denounced Dimitry Medvedev, his Russian counterpart, as a "mouthpiece" of Iran's enemies, highlighting rising tensions between the two countries.

Ahmadinejad made the comments after Russia joined the US and the EU in accusing Iran of having a hidden agenda for its controversial nuclear programme.

Russia had already upset its past ally when it backed US-led calls for more sanctions against Iran.

"In a meeting with his ambassadors, [Medvedev] said we have knowledge that Iran is moving towards the bomb," Ahmadinejad said in pre-recorded footage broadcast by state television on Saturday.

"We regret that Medvedev has become the mouthpiece for the plans of Iran's enemies."

Russia's attitude towards Iran has appeared to dramatically shift after Medvedev visited the US late last June....."
Posted by Tony at 7:21 AM