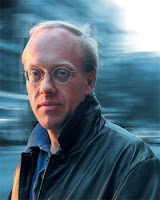 "Chris Hedges, veteran war reporter and author of War Is a Force that Gives Us Meaning and many other books, discusses the convergence of the Egyptian and American national security states as their puppet military dictatorship kidnaps and tortures people at the best of the U.S. government, the incompatibility of the rule of law and a republican form of government with empire and oligarchy, the “ghost prisons” and “ghost detainees,” held by the U.S. government around the world, the tortured (and false) testimony of Ibn-al Shaykh al-Libi which was used by Colin Powell in his UN speech to justify aggressive war against Iraq, how Mamdah Habib was threatened with rape by an animal, the perhaps thousands of victims of these crimes, his article about American war crimes in Iraq (soon to become a book), the Egyptian war against domestic dissidents, the long term consequences of abandoning law and the American population’s preference for Amusing Ourselves to Death."

Click Here to Listen
Posted by Tony at 8:39 AM