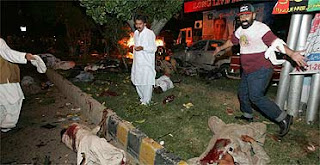 "The massacre in Karachi had been widely predicted. Benazir Bhutto herself has stated that she was aware of the dangers. The government pleaded with her to delay her return. Jihadi leaders, angered by her slavish support of US foreign policy, had publicly threatened to kill her. She survived but a few hundred people have been killed without reason.Her husband, who decided not to accompany her, has accused Pakistani intelligence of complicity in the attacks. Benazir Bhutto herself has preferred to attack the followers of a dead military dictator.

Once it had become obvious that something was being planned, she would have been better advised to make a quiet return, but she insisted on a show of strength. The planning had been going on for over a month. The 130,000 people who were brought to welcome her in trucks and buses from allover the province(how many of them were paid is still not clear). In addition there were 20,000 police and paramilitary personnel for her protection. All to no avail. It ended in a bloodbath, remind us once again of the volatile nature of politics in Pakistan.

More trouble lies ahead. Benazir may be the preferred politician of Washington and the EU, but the Supreme Court is considering five separate petitions to reject the Ordnance that pardons corrupt politicians. Were the court to accept these petitions, Ms Bhutto would have to serve time in prison. This would not displease the government. They would pretend to bow before the dictates of justice.

The tragedy of Pakistan is that the People's Party of Bhutto and its rivals offer no real alternatives to the policies currently being pursued. The State Department notion of Bhutto perched on Musharraf's shoulder parrotting pro-Washington homilies was always ridiculous. Now there are doubts as to whether she will even reach the General's shoulder."
Posted by Tony at 9:58 AM