Putin warns US against military action on Iran 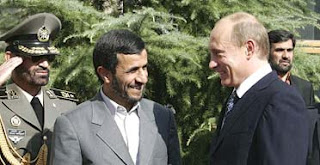 "The Russian president, Vladimir Putin, today warned the US not to use force against Iran in the current nuclear dispute. Any military intervention in the Caspian Sea area would be unacceptable, Mr Putin declared as he attended a five-country regional summit in Tehran.

"We should not even think of making use of force in this region," Mr Putin told his fellow leaders.

His remarks also appeared directed at Azerbaijan, amid Russian media speculation that the US might be trying to negotiate with the republic on the right to use military facilities there, something Azeri officials deny.

"We are saying that no Caspian nation should offer its territory to third powers for use of force or military aggression against any Caspian state," Mr Putin said.
A summit declaration from the five, which include Turkmenistan and Kazakhstan beside Russia, Iran and Azerbaijan, subsequently stressed that "under no circumstances will they allow (the use of their) territories by third countries to launch aggression or other military action against any of the member states".

The first Kremlin leader to visit Iran since Joseph Stalin in 1943, Mr Putin is holding talks with Mahmoud Ahmadinejad, the Iranian president, on Tehran's nuclear dispute with the west during the summit......"
Posted by Tony at 4:57 AM