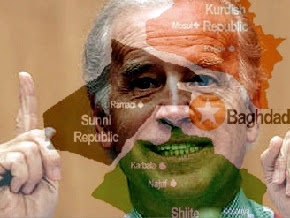 
"Two weeks ago, the U.S. Senate passed a nonbinding resolution supporting "regional federalism" in Iraq. The measure is a disaster waiting to happen, and should be called what it is: a blueprint for ethnic cleansing and potentially a full-blown civil war......

But despite its many flaws, the Biden plan will likely continue to gain currency in Washington, D.C., because it offers the promise -- a false promise, but a straw at which to grasp -- of a "bipartisan" fix to the Iraqi mess that would allow the United States to leave without either admitting defeat at the hands of the Iraqi resistance or taking responsibility for the disastrous consequences that resulted from the choice to attack the well-contained country in the first place. What's more, it allows U.S. lawmakers to say they voted for a change of course without substantially changing anything, and, perhaps most importantly, it allows the U.S. strategic class to keep its imperial ideology above scrutiny."
Posted by Tony at 7:28 PM