Look Who is Talking About "Arab Solidarity" Now! 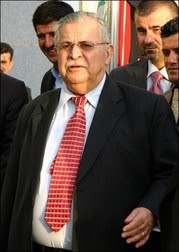 "President Assad's remarks are dangerous and run contrary to the spirit of Arab solidarity," Talabani, himself a Kurd, was quoted as saying in an interview with the Saudi daily Asharq Al-Awsat.

"Usually I would refrain from commenting on Syrian positions in order to preserve our historic ties, but this time I am unable to support this dangerous crossing of red lines."

On Wednesday Assad said he would support a Turkish incursion into northern Iraq against Turkish Kurdish rebels, calling such action Ankara's "legitimate right."

Syria and Turkey both oppose any Iraqi Kurdish attempt to break away from the central government in Baghdad, fearing that this could fuel separatist ambitions among their own Kurds......"
Posted by Tony at 10:17 AM