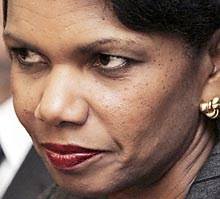 "Despite her high-pitched pronouncements about George Bush's commitment to "ending the Palestinian problem", US Secretary of State Condoleezza Rice achieved very little -- if anything -- in her latest visit to the Middle East.....

It is not only the words of Israeli leaders that make Palestinians sceptical of Israeli intentions. Israel has been working hard to undermine any atmosphere conducive to a successful conference. Israel's occupation army continues to invade Palestinian towns, nearly on a daily basis, inflicting death and havoc on innocent civilians.

Considering the grim reality on the ground, and the oft-optimistic statements by some PA officials portending the final and imminent arrival of peace, some Palestinian intellectuals have castigated the Ramallah-based leadership, calling it "naïve, stupid and irresponsible".

Ali Jerbawi, a prominent Palestinian academic and professor of international relations at Birzeit University, called PA optimism about American and Israeli intentions "mendacious and misplaced". "Those who think that the American-Israeli stances have changed are infinitely naïve," he said.

Jerbawi accused the PA leadership of trying to compensate for the imbalance with Israel, first with superficial formalities and high-profile meetings and encounters, and, second, with creating false hopes and high expectations of the present process.

"The Palestinians are in their worst situation ever. There is a geographical-political division between the West Bank and the Gaza Strip, poverty is rife and economic collapse is everywhere, and Israeli efforts to obliterate Palestinian presence in Jerusalem continue unabated while Arab support for the Palestinian cause is at an all-time low."

Jerbawi asks: "when will we stop running after the mirage, thinking it is water?""
Posted by Tony at 6:53 AM