A fight on many fronts 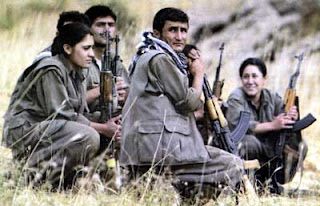 "......The wider issue in the crisis is the question of cross-border sanctuary for guerrilla groups, and the role of foreign governments in supporting them. Turkey's action in threatening an invasion of northern Iraq highlights the double standards of other governments. Although Turkey's preparations for war were denounced by George Bush this week, how does Ankara's sabre-rattling differ from Washington's threats to attack Iran because of Tehran's alleged military support for anti-American insurgents inside Iraq?

What of the fact that another Kurdish guerrilla outfit, an anti-Tehran group that operates in north-western Iran, uses rear bases inside Iraqi Kurdistan just like the PKK? Some of its leaders have been received by Bush administration officials in Washington, and are believed to get CIA and, perhaps, Israeli support......

A Turkish invasion of Iraq would be a highly dangerous move, but it would not be a catastrophe. The aims would be limited, and no one seriously believes that Turkish troops would be trying to occupy the whole of northern Iraq. The invasion that has dealt the biggest blow to stability remains the American and British attack on Iraq in 2003."
Posted by Tony at 6:12 AM