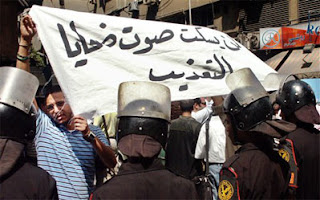 An Egyptian activist flashes an Arabic banner supporting tortures victims in front of anti-riot soldiers during a protest in Cairo.

A GREAT PIECE
By Chris Hedges

".....Mubarak, who has ruled Egypt for 26 years and is grooming his son, Gamal, to succeed him, can torture and “disappear” dissidents—such as the Egyptian journalist Reda Hilal, who vanished four years ago—without American censure because he does the dirty work for us on those we “disappear.” The extraordinary-rendition program, which sees the United States kidnap and detain terrorist suspects in secret prisons around the world, fits neatly with the Egyptian regime’s contempt for due process. Those rounded up by American or Egyptian security agents are never granted legal rights. The abductors are often hooded or masked. If the captors are American the suspects are spirited onto a Gulfstream V jet registered to a series of dummy American corporations, such as Bayard Foreign Marketing of Portland, Ore., and whisked to Egypt or perhaps Morocco or Jordan. When these suspects arrive in Cairo they vanish into black holes as swiftly as dissident Egyptians. It is the same dirty and seamless process.

We have nothing to say to Mubarak. He is us. The general intelligence directorate in Lazoughli and in Mulhaq al-Mazra prison in Cairo allegedly holds many of our own detained and “disappeared.” The more savage the torture techniques of the Mubarak regime the faster the prisoners we smuggle into Egypt from Afghanistan and Iraq are broken down. The screams of Egyptians, Iraqis, Pakistanis and Afghans mingle in these prison cells to condemn us all......

Mubarak has in the past few weeks decided to shut down the last remnants of opposition. He has sent in riot police to arrest dozens of striking labor leaders, rounded up more than a thousand members of the Muslim Brotherhood, the largest opposition group, and tossed seven journalists into prison. The charges against the journalists range from misquoting Egypt’s justice minister to spreading rumors about the health of Mubarak to defaming his designated heir, Gamal. The detainees, as usual, complain of torture and beatings. And persistent rumors of death squads, bolstered by the “disappearance” of some of the regime’s most outspoken critics, have turned Egypt into a state that has mastered the art of internal and external extraordinary rendition.

The few lonely Egyptian voices and institutions that dared to speak out against the mounting repression have been silenced, including the Association for Human Rights and Legal Aid, which was shut down by the government last month. The government also recently arrested two political activists—Mohammed al-Dereini and Ahmed Mohammed Sobh, both members of Egypt’s tiny Shiite minority—after the men publicized testimonies from prisoners detailing torture in the Egyptian prison system. Egypt’s most prominent dissident, the sociologist Saad Edin Ibrahim, is in exile, too frightened to go home and repeat his own brutal experience in an Egyptian prison.

The Egyptian Organization for Human Rights has confirmed more than 500 cases of police abuse since 1993, including 167 deaths—three of which took place this year—that the group “strongly suspects were the result of torture and mistreatment.” There are now 80,000 political prisoners held in Egyptian prisons. The annual budget for internal security was $1.5 billion in 2006, more than the entire national budget for health care, and the security police forces comprise 1.4 million members, nearly four times the number of the Egyptian army......

We have nothing left to say to the Mubarak regime. The torture practiced in Egypt is the torture we employ for our own ends. The cries that rise up from these fetid cells in Egypt condemn not only the Mubarak dictatorship but the moral rot that has beset the American state......"
Posted by Tony at 5:24 AM