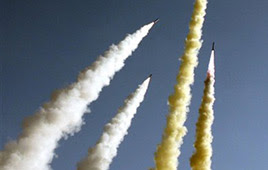 "20/10/2007 Iran warned on Saturday it would fire off 11,000 rockets at enemy bases within the space of a minute if the United States launched military action against the Islamic republic.
"In the first minute of an invasion by the enemy, 11,000 rockets and cannons would be fired at enemy bases," said a brigadier general in the elite Revolutionary Guards, Mahmoud Chaharbaghi.
"This volume and speed of firing would continue," added Chaharbaghi, who is commander of artillery and missiles of the Guards' ground forces, according to the semi-official Fars news agency.
The United States has never ruled out attacking Iran to end its defiance over the Iranian nuclear program, which the US alleges is aimed at making nuclear weapons but Iran insists is entirely peaceful.Iran has for its part vowed never to initiate an attack but has also warned of a crushing response to any act of aggression against its soil.
"If a war breaks out in the future, it will not last long because we will rub their noses in the dirt," said Chaharbaghi.
"Now the enemy should ask themselves how many of their people they are ready to have sacrificed for their stupidity in attacking Iran," he said.
Iranian officials have repeatedly warned the military would target the bases of US forces operating in neighboring Iraq and Afghanistan in the event of any attack and already has these sites under close surveillance. Chaharbaghi said that the Guards would soon receive "rockets with a range of 250 kilometers" whereas the current range of its rockets is 150 kilometers.
"We have identified our targets and with a close surveillance of targets, we can respond to the enemy's stupidity immediately," Chaharbaghi added.
He said that the Guards' weapons were spread out throughout the country and so would not be affected by any isolated US strikes against military facilities. The Guards are Iran's elite army and responsible for its most significant weapons such as the longer range Shahab-3 missile which has Israel and US bases in the Middle East within its range."
Posted by Tony at 7:29 AM