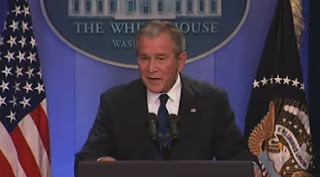 "We are not living a sound and rational World where far-reaching decisions by the US President are based on an understanding of their likely consequences.

A World War III is no longer a hypothetical scenario.

During the Cold War, the concept of "mutual assured destruction" (MAD) was put forth. An understanding of the devastating consequences of nuclear war largely contributed to avoiding the outbreak of war between the US and the Soviet Union.

Today, in the post-Cold war era, no such understanding prevails. The specter of a nuclear holocaust, which haunted the world for half a century has been relegated to the status of "collateral damage"......"
Posted by Tony at 5:33 AM