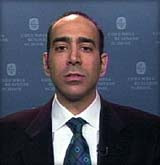 The Middle East peace process is returning to the stage, with no more sense of reality than a Broadway extravaganza.

A Very Good Comment
By Ali Abunimah
The Guardian

"The "Middle East Peace Process" is like one of those big budget Broadway extravaganzas; they go on for years, but with each revival the cast changes. What may seem like a tired production to some nevertheless manages to remain fresh to the gullible throngs willing to hand over the price of admission......

Other key actors include Mahmoud Abbas, a colourless quisling whose only power base is the American and Israeli guns that keep him installed in his Ramallah Green Zone - filling in for the late Yasser Arafat as leader of the Palestinians, and Ehud Olmert, understudy to Ariel Sharon who left the stage unexpectedly......

Last week, just after Abbas's representatives met with Israeli counterparts to try to hammer out a "declaration of principles" to unveil at the Annapolis meeting, the Israeli army announced the expropriation of almost 300 acres of Palestinian land near occupied East Jerusalem for the purpose of expanding the already massive Jewish-only settlements which bisect the West Bank and render a contiguous Palestinian state impossible.....

What's more, none of the players has the credibility or strength to negotiate on behalf of those whom they purport to represent. Abbas and his unelected cronies are seen by many Palestinians as petty collaborators determined to do all they can to retain their place at the master's table. Despite an overwhelming desire among Palestinians for unity, Abbas, blackmailed and bribed by the EU and US, refuses to talk to Hamas to heal the rifts caused by the efforts of Fatah militias armed and supported by Israel and the US to overturn the results of the January 2006 election won by Hamas. There can be no serious peace talks without Hamas on board.....

....Last week, Tony Blair met with one of those coalition leaders, deputy prime minister Avigdor Lieberman who heads the proto- fascist Israel Beitenu party. According to Ha'aretz, Lieberman told Blair that any solution to the Israeli-Palestinian conflict "has to include Israel's Arab citizens as well, when the basis for an agreement should be a land swap and a population transfer." In other words, there can be no peace without the expulsion of over one million Palestinian citizens of Israel......

In Palestine-Israel, this means abrogating all laws in Israel that systematically privilege Jews and harm non-Jewish citizens, ending Israel's military tyranny in the Occupied Territories, and allowing refugees to return home. Nothing like that will be on the agenda in Annapolis which is why the effort will fail."
Posted by Tony at 5:05 AM