The Iraqization of Palestine: Two killed and more than 20 wounded by Abbas's militia in Qalqilya 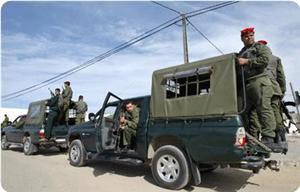 Medical sources at the UNRWA hospital in Qalqilya said that the child died as a result of being wounded by a live bullet fired from a close distance, while 20 other wounded Palestinians arrived at the same hospital.

On Saturday evening PA security men fired directly at 20-year-old Husam Abu Asab from the Kura'an clan wounding him seriously. The young man was taken to hospital where he died on arrival.

Upon hearing the news of the death of the young man local residents attacked the PA police stations in the city.

Local sources said that the PA security forces brought in reinforcements in coordination with the Israeli occupation and imposed a curfew on the Kura'an neighbourhood where the first victim of the PA security fell to prevent protests.

The local branch of the Palestinian Scholars League said that there efforts being exerted to contain the situation and to stop matters sliding further towards more chaos."
Posted by Tony at 5:58 AM