Bhutto bombing kicks off war on US plan 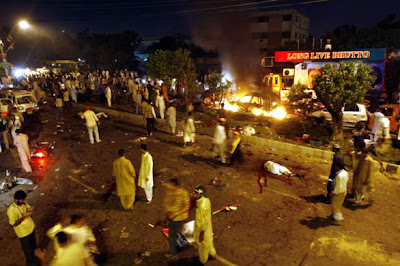 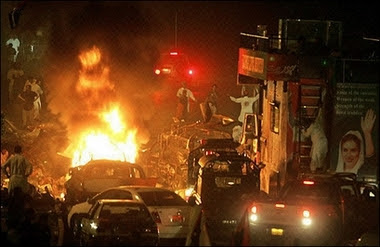 "The first shot has already been fired in the battle that Islamists have vowed to wage against the Washington-inspired and brokered attempt at regime change in Pakistan. It came in the form of twin bomb blasts aimed at Benazir Bhutto, the lynchpin in US machinations, within hours of her arrival in Karachi after years in exile......

attack was hardly a surprise. Militants see Bhutto's return to Pakistani politics as a Western-backed coup against Islamists in Pakistan, akin to the arrival in the Afghan capital, Kabul, of the US-backed Northern Alliance in 2001......

Bhutto's return to Pakistan is part of a complex arrangement brokered by Washington and its allies to ensure that a pro-Western government gains power after parliamentary elections in about three months' time. The plan was put in train earlier this month with the promulgation of a National Reconciliation Ordinance, under strong US pressure, by Pakistan's current leader, General Pervez Musharraf......"
Posted by Tony at 5:14 AM