Masri: The PA chief is politically and constitutionally fading 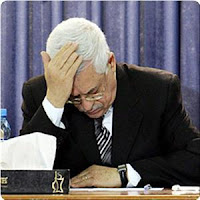 "GAZA, (PIC)-- Mushir Al-Masri, the secretary-general of Hamas-affiliated change and reform parliamentary bloc, has opined that PA chief Mahmoud Abbas and his entourage were "politically and constitutionally vanishing".

A Kuwaiti newspaper had quoted a PA source as saying that Abbas had threatened during talks with American secretary of state Condoleezza Rice that he would resign from his post as a PA chief if the autumn conference concluded without results, and that he called on Rice to set a political agenda and a timetable before attending the conference.

In a press release to the Quds Press, Masri doubted the sincerity of Abbas's statements, saying that Abbas is too weak to make such a bold step.

The lawmaker highlighted that the political turmoil in the Palestinian arena is a natural result of Abbas's political choices, who rebuffed internal dialogue and wagered on the Zio-American policies, calling on Abbas to reconsider his positions because the Israeli occupation would give him nothing......"
Posted by Tony at 7:39 AM