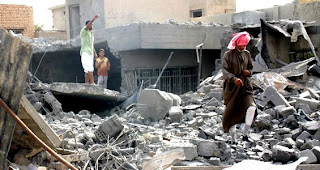 "Laith Mushtaq was one of only two non-embedded cameramen working throughout the April 2004 'battle for Fallujah' in which 600 civilians died.

Five years on, he recounts the events he witnessed and filmed.

"What you saw on your TV sets at home reflects only ten per cent of the reality. Also, if you watch those pictures at home, you can change the channel.

But we were in the middle. We smell. We feel, see, and touch everything. We could touch the bodies, but we couldn't change the channel. We were the channel.

When I think of Fallujah, I think of the smell. The smell was driving me crazy. In a dead body, there is a kind of liquid. Yellow liquid. The smell is disgusting, really. It sticks in your nose. You cannot eat anymore.