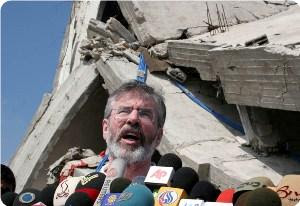 "The Irish Sinn Fein leader Gerry Adams visited the Gaza strip on Wednesday and toured areas that was attacked by the Israeli military during January Cast Lead operation.

Adams told reporters that" what happened in Gaza was wrong" he added that" Gazans have the right to leave in harmony and security." The Irish official also said "Israel must know that Gaza residents have rights".

Regarding the ongoing siege on the Gaza strip Israeli is imposing since June of 2006, Adams commented" Israel should open all crossings, allow all supplies into Gaza and facilitate the travel of patients and end the siege."

Since June of 2006 Israel allow limited amount of supplies into the costal region, UNRWA and other aid agencies operating in Gaza say that those amounts are not enough to cover the needs of the 1.5 million Palestinian living in Gaza......"
Posted by Tony at 7:01 AM