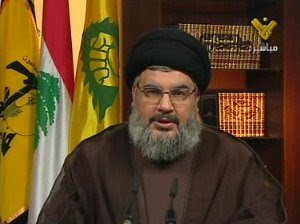 NOTE: I will post the link to the speech (in Arabic) as soon as it is available

"10/04/2009 Hezbollah Secretary General Sayyed Hasan Nasrallah denied on Friday the Egyptian aggressive claims against the Resistance party, stressing that his party has no intentions or plans at all to destabilize the Egyptian security.....

SAMI CHEHAB IS A MEMBER OF HEZBOLLAH WHO WAS HELPING PALESTINIANS
Sayyed Nasrallah then began the first axis of his speech by recalling of the main facts related to the whole case. According to his eminence, the Egyptian authorities have detained on November 19, 2008, a Lebanese citizen and accused him alongside other people of attempting to smuggle arms and equipment to Gaza.

"One month later, the Zionist entity launched its deadly aggression against Gaza," Sayyed Nasrallah noted, recalling that Hezbollah's position during the offensive was transparent and public. His eminence recalled that he has personally urged the Egyptian regime to open crossing with Gaza. "Then, it was our duty to denounce the Egyptian regime for its refusal to open the crossings," Sayyed Nasrallah said. "Right after this stance, a political and commercial huge campaign was launched in Egypt against me and Hezbollah, under the instructions of the Egyptian authorities and intelligence. Yet, we considered the campaign as a reaction and a natural price for our stance and we were ready to pay it."....

Turning into facts, Sayyed Nasrallah recalled that Hezbollah is clear in its positions and has nothing to hide in whatever circumstances. Hence, his eminence declared that the Lebanese citizen Sami Chehab, who was detained in Egypt, was actually a member of Hezbollah. "Our brother Sami, is a member of Hezbollah, we don’t deny this," Sayyed Nasrallah announced. "He was providing logistic help to the Palestinian resistance at the Egyptian-Palestinian borders," his eminence added, noting that this was the only right thing that actually didn't figure in the Egyptian claims. "All other charges against him are false."

"If aiding the Palestinians is a crime, then I am proud of it," Sayyed Nasrallah emphasized. His eminence noted "that the aim here is to agitate the Egyptian people and to defame Hezbollah's pure and bright image. This aims to only please the Americans and Israelis for the Egyptian regime has failed by all means."

CHARGES THAT HEZBOLLAH WAS PLANNING FOR ATTACKS IN EGYPT REJECTED
Sayyed Nasrallah emphasized that the one who should be charged and condemned over this case was not Sami or his friends but the Egyption regime. "The Egyptian regime should be charged and condemned for besieging Gaza," his eminence said, noting that the mentioned regime is working day and night on destroying Gaza tunnels......"
Posted by Tony at 1:42 PM