The One and Only Credible Arab Leader Speaks to Set the Record Straight..... 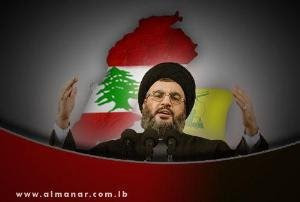 Sayyed Nasrallah to Comment Friday on Egyptian Claims against Hezbollah

Sayyed Nasrallah would comment, during his speech set to be broadcasted by Al-Manar TV, on the latest Egyptian aggressive claims against Hezbollah.

Sayyed Nasrallah would also tackle the latest developments in Lebanon and the region, namely the forthcoming parliamentary elections, during the speech.

On Wednesday, Egypt's state prosecutor claimed that Hezbollah was plotting to carry out attacks inside the country and "spreading Shiite ideology in Egypt."

According to a statement from the prosecutor, "Egypt's attorney general received a note from state security about information confirmed by questioning about Hezbollah leaders sending some elements to the county to attract members to work with the organization and persuade them to join its ranks with the aim of carrying out acts of aggression inside the country."
However, the statement did not give details of possible attacks.

Hezbollah stressed on many occasions that it had no activity outside Lebanon and that its sole focus was on countering Israeli threats against Lebanon and confronting any Zionist aggression on its soil."
Posted by Tony at 10:38 AM