Arrests Go on in Egypt ahead of Nationwide Strike 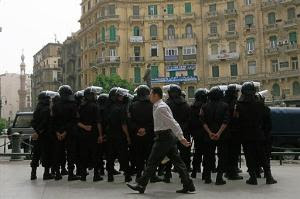 "06/04/2009 Egyptian riot police arrest 30 people ahead of a nationwide strike and deploy extra security forces in the capital Cairo and other cities.
A security official said that police have been given orders to arrest anyone taking part in demonstrations on the eve of a national strike.
Among the 30 arrested in the Mediterranean city of Alexandria on Sunday, he said, are three students caught for distributing posters calling for people to join the strike......."
Posted by Tony at 3:00 AM