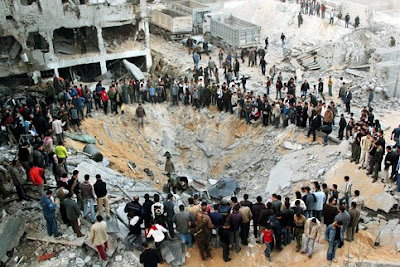 (Left) Palestinians gather around a crater caused by an Israeli air strike in the northern Gaza Strip.
"At a time when Western governments refrain from using their power to stop Israel's ongoing violations of international law, many civil society organizations silently watch the moral corrosion of their governments. At the "Israel Review Conference" in Geneva this month and the Russell Tribunal slated for early 2010, however, civil society will use its power and call Israel to account.....

The first Russell Tribunal or International War Crimes Tribunal investigated and evaluated American foreign policy and military intervention in Vietnam after the defeat of French forces in 1954. At the establishment of the Russell Tribunal, Bertrand Russell quoted the Chief Prosecutor of the Nuremberg War Crimes Trials, Robert H. Jackson, stating that "If certain acts and violations of treaties are crimes, they are crimes whether the United States does them or whether Germany does them. We are not prepared to lay down a rule of criminal conduct against others which we would not be willing to have invoked against us." Civil society initiatives towards freedom, justice and equality for the Palestinian people confirm that the same counts for Israel."
Posted by Tony at 6:26 AM