'Gaza wears a face of misery' 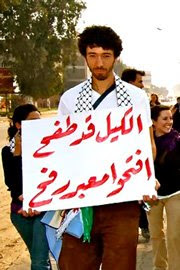 "Philip Rizk, 27, a freelance journalist and blogger who has been reporting from Gaza since 2005, was arrested by Egyptian security forces after a pro-Palestinian rally in Cairo on February 6.

He was released a few days later without being charged.

While in Gaza, he filmed The Palestinian Life, a documentary highlighting non-violent means of resistance against the Israeli occupation.

The film is premiering at the London International Documentary Festival on April 4. Here are excerpts from an interview Rizk gave to Al Jazeera shortly before the film’s debut.......

I needed to go to Palestine to understand what was going on there. Studying and reading about it didn't make sense until I saw the wall, the settlements and physical occupation. After doing so, and going through the kinds of experiences I went through, I wanted to translate what I saw into the medium of film.

I'm also planning a film in West Africa, and then I'd like to focus on Egypt, which is a real police state. There's red tape everywhere so it's going to be a challenge."
Posted by Tony at 5:02 AM