Arabs Strap Up for Netanyahu Era 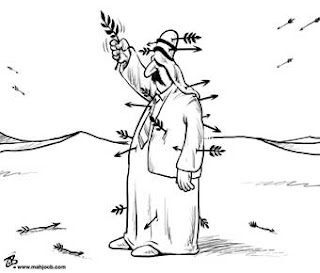 "CAIRO, Apr 10 (IPS) - Many Arabs are seeing the emergence of Binyamin Netanyahu as prime minister of Israel as the death knell for the already moribund peace process....

Netanyahu has also called the extirpation of Palestinian resistance faction Hamas in the Gaza Strip a "strategic goal". According to the new Israeli PM, the outgoing government's recent onslaught against the Hamas-run enclave - which killed more than 1,400 mostly civilian Palestinians and destroyed vast swathes of infrastructure - ended prematurely.

Not unlike his "centrist" opponents, Netanyahu also refuses to rule out an Israeli military strike against Iran, which Israel, along with its U.S. patron, accuses of having nuclear weapons ambitions.

"Strap yourselves in - Netanyahu's arrived," editorialist Abdel-Rahman Al- Rashed wrote in London-based daily Al-Sharq Al-Awsat Mar. 28. "The big question is, where will Netanyahu lead the region? Will his era be marked by more wars and bloodshed in Gaza and the West Bank - or even in Iran?"......"
Posted by Tony at 5:36 AM