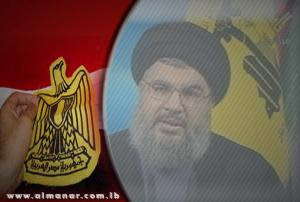 Indeed, while Hezbollah Secretary General Sayyed Hasan Nasrallah is scheduled to declare his party's official stance over the claims during a speech to be delivered Friday night, the refutation of Egypt's accusations came from its own ground putting these claims as part of a campaign against the Resistance party over its objection to the Egyptian regime's behavior during the Israeli aggression against Gaza.

In this context, the general supervisor of the Muslim Brotherhood's mission in Egypt, Ibrahim Munir, denounced on Friday the Egyptian regime's charges against Hezbollah as fabricated.

Munir said that the feelings of failure and fiasco were dominating on the Egyptian regime nowadays following the Western attempts, namely the American, to approach to Turkey and Iran and also as a result of its deadlock at the internal and external levels.

"The Egyptian regime is seeking, through its claims against Hezbollah, to tell the West and the Zionist entity that it was still able to achieve the goal of wiping out the Resistance in the region," Munir emphasized.

Munir added that Hezbollah Secretary General was very popular among Egyptians for the achievements made by his brave Resistance against the Zionist enemy......"
Posted by Tony at 5:47 AM