The dark side of Dubai 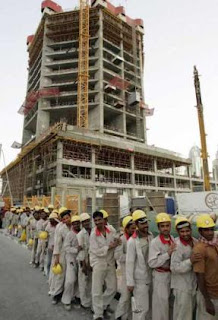 "Dubai was meant to be a Middle-Eastern Shangri-La, a glittering monument to Arab enterprise and western capitalism. But as hard times arrive in the city state that rose from the desert sands, an uglier story is emerging.....

There are three different Dubais, all swirling around each other. There are the expats, like Karen; there are the Emiratis, headed by Sheikh Mohammed; and then there is the foreign underclass who built the city, and are trapped here. They are hidden in plain view. You see them everywhere, in dirt-caked blue uniforms, being shouted at by their superiors, like a chain gang – but you are trained not to look. It is like a mantra: the Sheikh built the city. The Sheikh built the city. Workers? What workers?....."
Posted by Tony at 3:39 AM